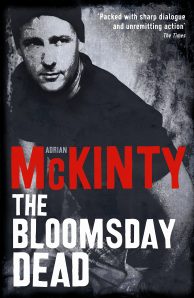 Michael Forsythe might be, as one of his assailants puts it, ‘un-fucking-killable’, but that doesn’t seem to deter people from trying. He’s living in Lima, reasonably well-hidden by the FBI’s Witness Protection Program, but Bridget Callaghan, whose fiancé he murdered twelve years ago, has an enduring wish to see him dead. So when her two assassins pass him the phone to speak to her before they kill him, Michael thinks she just wants to relish the moment. In fact, out of desperation, she is giving him a chance to redeem himself. All he has to do is return to Ireland and find her missing daughter. Before midnight.

Tenacious and brutal, with the hunted man’s instinct for trouble, Forsythe leaves a trail of mayhem as he tries to end the bloody feud once and for all. The Bloomsday Dead pulsates with break-neck action and wry literary references; McKinty’s distinctly Irish voice packs a ferocious punch.