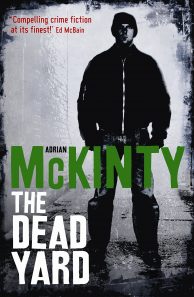 It’s been five years since Michael Forsythe slaughtered Darkey White and his crew of thugs in Harlem. Five years spent in the Witness Protection Program with a price on his head and not much to do with his days. Allowed to take a holiday at last, Michael heads to Spain, but he’s arrested after a football riot and brought to a Spanish prison. Enter British intelligence agent Samantha Caudwell, who offers Michael a deal: spend ten years in jail under new riot laws, or go on a special assignment to infiltrate an IRA sleeper cell in New England.

As The Dead Yard unfolds, Michael insinuates himself into the terror cell’s inner circle. He crosses and double-crosses, escapes his own lies by a hair’s breadth, falls in love, kills, and kills, and kills again.

A Wee Review - The Dead Yard by Adrian McKinty